Background
John is a midwestern boy, born 24 years ago to a farmer and a schoolmarm, with a sister a couple of years younger. When the recent unpleasantness began, his father signed up and would serve at Gettysburg. When he returned home, he would tell John what he saw, but John did not believe his wild stories.

Aged 16, he signed up and his mother said it was a waste of his intellect. A former Union army scout, he served for five years until the ceasefire and he was mustered out. Since then, he has worked for Union Blue in the Rail Wars and occasionally for bounty hunters using his tracking skills and penchant for sniping opponents. Currently, he is without a job.

He joined the army because he believed in the Union and despite the ceasefire, he isn't a fan of the Confederacy and will happily help those aiding the Union against the Confederacy, as long as they would not be wanted by the Union for whatever they were doing.

Sadly, on the trails, he has encountered a few things, heard a few things and found a few things. He may not know the truth about what happened, but he knows some of the weirder aspects of the West; some of which have tried to kill him. One incident, a couple of years ago, out in Alabama working for the Union Blue Railway, he was out on his own, following a lead on a Wasatch rail spur, when something began stalking him in the dark.

Never did get the damn thing, but I saw its eyes, gleaming in the moonlight; it was feline and malevolent. If I hadn’t gotten lucky, then I’d have been another meal. Even so, my leg is now pretty messed up. Never going to be winning any foot races anymore. Not stopping me riding, but pity bullets didn’t hurt it whatever it was. Fire scared it away, but I planted a few rounds right between its eyes and it kept coming.
OOC Comments
Charisma: 0; Pace: 6"; Parry: 5 (½ Fighting +2); Toughness: 6 (½ Vigor+2 plus armor); 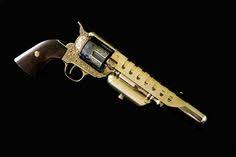 • Range: 12/24/48
• Damage: 2d8 per Smith and Robards Magnum Pistol Round
[list]☞ Special: If hit, whether damaged or not, the target of the attack rolls Strength versus the shooting roll of the attacker. If the target fails, they are knocked prone, or pushed 1" and knocked prone if the shooter gets a raise on the roll. This does not affect targets size 3 or greater. If they hit an obstacle while being pushed, they can be Shaken, as per the Push Maneuver on SWD p. 85. The same page also has information on the effects of Prone.
[/list]• RoF: 1
• AP: 2
• Shots: 6
• Features:
[list]☞ Min Str d6
☞ Adaptive Engineering: Can also use Smith and Robards Explosive Pistol Rounds [list]Damage: 3d6
AP: 1
Notes: If the Shooting roll results in snake eyes, the cartridge explodes in the chamber, detonating any remaining explosive rounds as well. The explosion causes 2d6 damage, plus an additional 1d6 for each
round detonated after the first, in a Small Burst Template.

[/list]☞ Fast Draw Holster: Due to the custom fitted grip and custom holster, the weapon nearly springs into the wielder's hand. It is a free action to draw.
☞ Steady Shot Aim Assist: Superior balancing and barrel weighting in the weapon eliminate excessive gun motion, centering the gun in relation to the grip, allowing for greater accuracy while on the move. The wielder gains the benefits of the Steady Hands Edge as it applies to this gun only, including shooting while running and shooting from moving vehicles.
☞ Ghost Rock Peep Sights: This glowing peep sight grants +1 to Shooting rolls. '
☞ Shiny: This custom beast of a weapon always draws attention and admiration. People are always asking about it, even when you'd rather they just ignore you.
☞ Unique Ammo: Ammunition is only available at official Smith and Robards locations or by mail order: $5 per round[/list]
Last edited by John Baxter on Thu Oct 04, 2018 4:22 am, edited 1 time in total.
OOC Comments
Charisma: 0; Pace: 6"; Parry: 5 (½ Fighting +2); Toughness: 6 (½ Vigor+2 plus armor);

card for veteran of the weird west
[dice]0[/dice]