Background Rolls
[dice:17x53ddb]66011:2[/dice:17x53ddb] I am the greatest swordsman / tracker / wizard / other skill to ever live. I had to leave home because challengers were disrupting our town.

[dice:17x53ddb]66011:3[/dice:17x53ddb] I was conscripted in the army and have just finished my duty. WIth nowhere to go and limited funds, I am hitting the open road to earn my fortune.
Red Clay 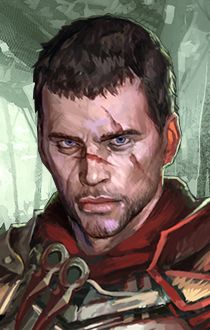 Former soldier of the Flaming Fist. Skilled at fighting either with Great Sword or Long Sword with shield.


Red Clay. It wasn’t the name he would have picked for himself but it was the name that stuck. He was born, Clay Redford but somewhere along the line, while working for the Flaming Fist someone started calling him Red Clay. He had seen a lot of bloody combat working for the Flaming Fist. It was true, his sword had spent more time bloody than clean, and he had a gift for fighting with blades.

His father had raised him to breed horses but Clay had sought out more interesting and dangerous endeavors. The Flaming Fist had provided him action, at the cost of freedom. His tour finished he had ignored the plea of his commanding officers and turned down the re-enlistment bonus they had offered.

Two things motivated him to move on. The first was simple. He’d seen a lot of death, good men dying for little coin in someone else’s war. Adventuring sounded like it might provide higher profits and hitting the road to find his fortunes had a great appeal to the swordsman.

Second, he was too well known. Red Clay, the Blade of Avernus, the Cutter, Bloody Clay, and other stupid names, he was born to swing steel and cut down others. Aspiring swordsmen had come from time to time seeking duals, desiring to say they had bested the Bloody Blade Clay Redford. Thus far, none could boast anything save a few who might in a drunken shame remark, they’d lived through a dual with Red Clay but had definitely been bested by the scared devil. Clay himself had some distinctive facial scars which did little to help him maintain a low profile.

Finished with the Flaming Fist, Clay rode his horse down the beaten track along the Sword Coast in search of Adventure. The horse and man cast a long shadow. Leather and plate armor, several rough old scabbards, chipped and scored shield, short cropped messy hair, only the horse looked fresh. Clay has taken care of Lost before setting off. Aptly named, Lost had been instructed by Clay to, get us lost so we can find a new Adventure.

Minor Traits Lists (All traits apply an arcane Trapping to the device and count as magic for damage versus supernatural beings.)
The same effect or trait can be applied/stacked no more than twice.

1) ● +1 Fighting when using this weapon.
2) ● Returning; As an action can return to wielder from within Sprit x2" flying in a straight path.
3) ● Patron Something Special Upgrade: +1 Parry to close combat weapon.

Passed down from grandfather to Clay.

Releasing the leather straps on the wrapped great sword Clay tossed aside the leather wrapping, unleashing the Great Sword and taking it two handed by the black leather over metal hilt. Hefting the dull grey blade an inky darkness waifed outward from the Vicious blade partially enveloping the scar faced fighter in a shroud of darkness.
Discord: Daniel (Lars)

Passed down from grandfather to Clay.

Releasing the leather straps on the wrapped great sword Clay tossed aside the leather wrapping, unleashing the Great Sword and taking it two handed by the black leather over metal hilt. Hefting the dull grey blade an inky darkness waifed outward from the Vicious blade partially enveloping the scar faced fighter in a shroud of darkness.

Lars wrote: ↑Thu May 14, 2020 3:22 pm @Technospawn
Swapping out Trademark Weapon Edge for Heirloom Edge.
Does this work? If not I’ll drop the +1 Fighting and do Something else?

-1 to be hit
+1 stealth
Counts as magic vs supernatural
Returning
The above list would count as 4 traits. That is 2 edges.


Ok I talked to Rob because this is an edge that I created a few years ago and he helped me work out the balance. He has been using it in his night bane game. Our conclusion is that magic vs supernatural is an affect of the BH and not a trait so all BHs have it.

And returning is its own trait. So that leaves -1 to be hit and +1 stealth. +1 to stealth is a +1 to a trait so it is minor and -1 to be hit is like +1 parry so it is a minor trait. So you can have one or the other or keep both and drop returning.

BH can only be taken once per item. But IBH can be added to the item once per rank.

The total stack is BH, IBH and IBH at Veteran.
GM Stuff
Initiative