The quest to destroy the Demon Prince of Death
GM: Ndreare
Post Reply
6 posts • Page 1 of 1 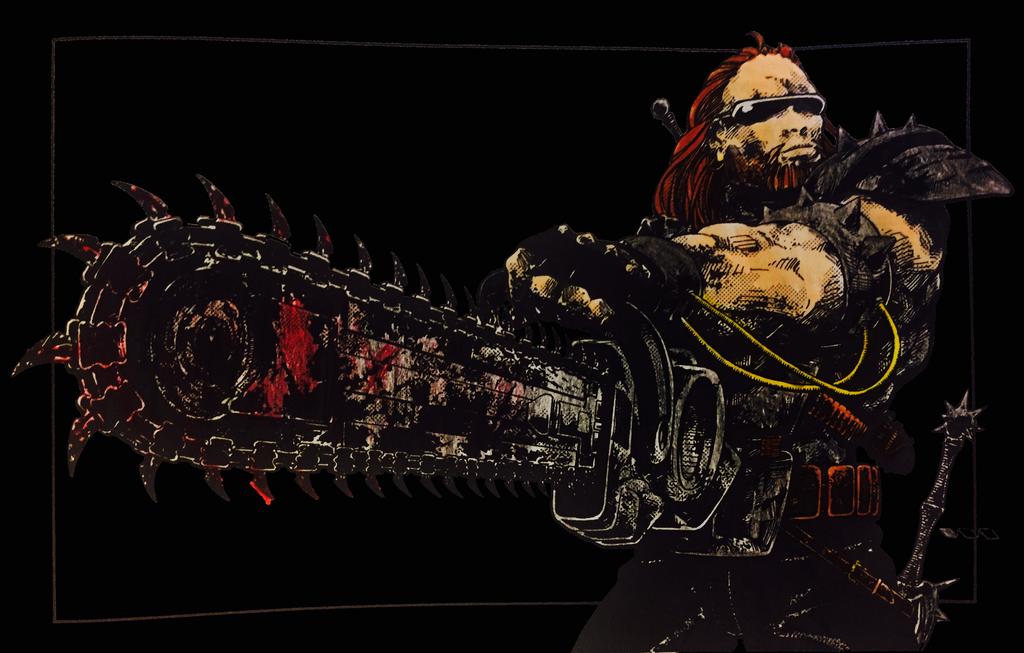 Last Call: Obviously, spending Burn means being able to make a huge impact in combat, but it also means hastening the process of completely burning out—with the Juicer inevitably entering Last Call as his body finally succumbs to the stresses placed on it by the bio-comp system.

The lower a Juicer’s Burn Rating the closer he is to death, and paradoxically the more dangerous he becomes. When a Juicer reaches a Burn Rating of three his Burn Die becomes a d8, at Burn Rating of two it's a d10, and at a Burn Rating of one it's a d12. Since a result of one on the Burn Die is required to lower his Burn Rating, a Juicer in Last Call has a chance to perform superhuman feats...and eventually bring his story arc to a fittingly triumphant close.

Burning Out (SEE MEGA-JUICER): The minor tremors, the hot skin, the strange glow just at the edge of vision...the last days are upon this Juicer. A Juicer reduced to a Burn Rating of zero dies by the end of the current adventure, and will probably want to go out in a Blaze of Glory (see Setting Rules on page 115 TLPG).
In Armor 20 (7) NE FF active: 24 (7) plus [Uncanny Reflexes]
Tougher Than Nails: 5 Wounds before Incapacitated

UNSTOPPABLE
Some beings, by virtue of sheer durability, can absorb massive blows. Unstoppable targets never suffer more than one Wound from a single attack; make any Soak rolls before applying this limit.


JUICER ABILITIES AND BONUSES
For the sacrifice of a long, normal life (or at least as close to one achievable in a Rift-ravaged world), the Juicer gains some amazing powers and gifts.

 Internal Repair System: The bio- comp system managing the drugs and chemicals within the Juicer’s body also works overtime to ensure his continued health and good repair. The Juicer gains Slow Regeneration (a natural healing roll once per day). There’s a continuously replenishing supply of nanites and chemical concoctions available for “emergency repairs.” As an action, the Juicer can make a natural healing roll at +2 to heal Wounds; this costs one charge. The system holds a maximum of three charges and requires eight hours to recover one charge.

 Super Speed: Juicers cover enormous ground quickly, they double their base Pace and move twice the normal distance, horizontally and vertically, when Jumping. Juicers also have the Fleet-Footed Edge (meaning they have Pace of 14 with a d8 running die).

 Super Strength: Juicers begin with +2 Strength die types, with no Trait maximum. They also begin with the Brawny Edge.

 Uncanny Reflexes: Juicer reflexes are superhuman, granting them −2 to be hit by any attack they are aware of and +2 on Evasion rolls.
MEGA-JUICER TREATMENT
Requirements: Novice, Juicer Mega-Juicers are super-soldiers
created by combining the powers of the bio-comp nanites with sub-dermal nanotech relays channeling ambient psychic energy through their body in a loop, turning them into nearly indestructible juggernauts! Mega-Juicers are Unstoppable. Permanently. Until they explode.

The Juicer reduces his Burn by one as his life-force fuels the creation of an energy dynamo within. When a Mega-Juicer reaches the end of his lifespan due to Burn, his eyes begin to glow blazing white and his skin becomes scorching hot to the touch. Whether he goes out in a Blaze of Glory or is Incapacitated by an enemy attack, he combusts—dealing 4d12+12 Mega Damage to everyone and everything in a Large Blast Template.
JUICER COMPLICATIONS
In addition to their abnormally short lifespan, Juicers have to deal with the following challenges.
 
Cybernetics: Although it is possible to add cybernetics to the Juicer’s already hacked biology, there is a severe drawback: each point of Strain removes a point of Burn!
 
Death Wish: The Juicer knows he’s going to die, and he wants to go out magnificently, having done something folks remember and are inspired by. He has the Death Wish (Minor) Hindrance.
 
Drug-induced Euphoria/Tranquility: In order to keep the Juicer from burning out over a matter of days, the bio-comp constantly supplies a combination of psychotropic drugs and chemical inhibitors to keep him happy and calm. Juicers live in a state somewhere between mildly ecstatic and stoned, which causes −1 to all Smarts or Smarts- linked skill rolls in non-combat or low stress situations. On the first round of an unexpected combat or high-stress situation, the Juicer doesn’t gain the benefits of Uncanny Reflexes or Quick.

 Psionics and Magic: The chemical cocktail inside the Juicer makes it impossible for him to use magic or psionics in any way.
B̶L̶A̶Z̶E̶ ̶O̶F̶ ̶G̶L̶O̶R̶Y̶ ̶

Not in use for thus game.

Rifts® is full of incredible heroes and mighty villains, overwhelming dangers and terrifying monsters. Against such odds, the choice to sacrifice for the greater good should be a powerful and meaningful one. It is rarely the dream or goal of any player to see his character die inconsequentially from a random hit by an unnamed minion, after all.

Any time a hero would be killed by an attack, instead of rolling for Incapacitation he may declare he’s going out in a Blaze of Glory.

Declaring Blaze of Glory means the hero chooses the moment he is ready to die, and he expends everything he has left in a stunning display of power and determination for one last great ride into the sunset. This must happen before the end of the current session.

In game terms, this manifests in the following ways:
 Any and all effects of the attack triggering Blaze of Glory are completely negated. This includes being Shaken.
 
Once declared, the player receives three Bennies. He should use these sparingly, as they are his insurance for lasting the rest of the session until his chosen moment comes.

The player continues to play, taking actions as normal. Once his Blaze of Glory scene and all of its circumstances are resolved, his character dies.

At the moment Blaze if Glory is stated, the action pauses while the player and the Game Master discuss the end goal for the character. The player should give a clear vision of what he would like to see happen, and the GM should indicate what is and is not on the table. For example, if the main villain of the campaign is present, and the GM is not prepared to simply have her killed outright, the two can discuss alternate roads to a meaningful defeat while still leaving her in play.

Alternately, some players may simply wish to say, “Make it good, please,” and let the GM come up with an appropriate ending that suits the hero's story arc. The moment should be more about story and less about rolling dice; Game Masters should not let a bad die roll ruin this last act.

While a final soliloquy—in the aftermath of the battle with his dying breath—is completely called for, the hero’s death is unavoidable, irrevocable, and final. Not even magic can bring him back.
Skills: Hindrances Edges
Edges Expanded
SPLIT THE SECONDS
This Edge allows them to ignore 2 points of Multi-Action penalties each turn (they can perform two actions at no penalty or three at −2 each).
BRAWLER
Brawlers increase their Toughness by 1 and roll Strength +d4 when hitting with their fists or feet.
Top

The Coalition has copies of the infamous Glitter Boy, and have used its cannon to great effect in developing naval cannons, heavy installation rail guns, and a variety of man portable and power armor rail guns. It also uses them in testing armor and the like. But this miniaturized version has the flexibility, efficiency, and relatively light weight make it the most potent man-portable, anti-armor & anti-demon weapon system ever produced. It is being tested for eventual implementation for the forces that will be put in contact with the invading demons. The only drawback is the delay in discharge as the capacitors spool up to release the hypersonic sabot payload. Several cases of these rifles have been released for field testing.
• Range: 50/100/200
• Dmg: 3d12+3, AP: 12 [TeD +4 AP]
• ROF: 1
• Shots: 12, Helical magazine containing APDS rounds (Armor-Piercing Discarding Sabots)
• Minimum Strength: d10 (20 lbs).
• Notes: Integrated Multi-Optics Scope, Hyperkinetic, MD, Snapfire
• • Helical magazines must be custom made by regional supply and have a base item rarity of Rare (see Requisition Setting Rule).
• • APDS rounds must also be custom made, but are easier to come by. They are considered Uncommon and are given out in lots of 12. Silver rounds are considered Rare.
• •Clips: 6 Standard, 2 Silver.
Top

My first character here in 2016 was a Juicer (Fell). He is dead. Blazed and came back as undead / GM tool to terrorize the rest of his previous party (Original 1st SET). I can’t play him, but I am interested in trying out another Juicer.

Heroic, Ex-Coalition exile with PTSD, Mega Juicer. During the Juicer Uprising in 105 PA Lieutenant Andrew Edwards betrayed the CS platoon he was assigned to and saved the Juicer Army of Liberation’s leader, Julian.

As a low ranking officer at the time and CS Sky Cycle Pilot, Edwards was ordered to attack civilians that were in the way of the CS getting to the JAL leader. It wasn’t planned, not by the JAL, Julian or anyone. It just happened that the CS assault was going to have to kill kids, D-Bee’s and other civilians to get Julian.

Lt. Edwards couldn’t force himself to kill the innocents in order to get to the target. His heart wasn’t really in the effort to start with. If anything the whole Uprising was rumored to be a fiasco of that Intel Black Ops Colonel Lyboc.

So the Sky Cycle Pilot turned on the CS when they wouldn’t stop killing innocents. He betrayed the CS. When asked why, he simply states, it was the right thing to due on that particular day. His CS career over at the end of the battle Edwards left with the JAL.

For a juicer to represent the dangers of becoming a legend we will reduce him to 3 Burn. This will increase his burn die.
Phase World - The Remorseless Game Master Bennies 8;
July 20, 2020 update
Mission: Up in The Air
https://savagerifts.com/sr/ucp.php?i=uc ... =signature

and of course update your signatures!
"Possible and practical are two comrades who rarely see eye to eye."
Rob Towell
Top
Post Reply
6 posts • Page 1 of 1