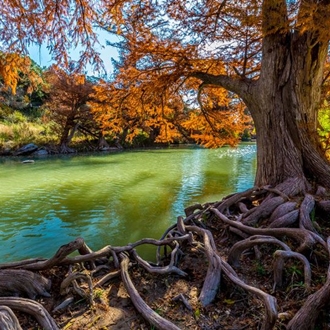 Historically known for its honey, bats and hot, humid summers perfect for staying near the water, and generally mild to cool winters. The apocalypse hasn’t hurt the city much, a new (decade old) wall surrounds the main city.

Uvalde County is a land where chalk cliffs surround three crystal-clear rivers and a canopy of Cypress trees casts the perfect blanket of shade from the sunny skies overhead as you roar into view of the main walled city on the high tech asphalt. Your arrival is just as the sun sets. On the way here several encounters were come across as you collectively raced across the badlands and made one stop at the half way point for fuel (gas, electric or food).

Erin Tarn proves to be a like minded traveling companion and for a intellectual she’s kinda fun.

Those that got a success on the Notice Roll (from the previous post) get the feeling someone is following the tribe from Kerrville to Uvalde. Whoever they are, they’re good and it is just a feeling. No proof.

Pulling up to the mile marker that indicates one mile to Uvalde the group takes in the scene. The sight of the walled city.

Uvalde survived the coming of the Rifts pretty well in regards to it’s building and such. The small city has around 3000 that farm nearby or live in the town proper. It’s a trade center, seedy one and the current location of the Black Widow Tribe. 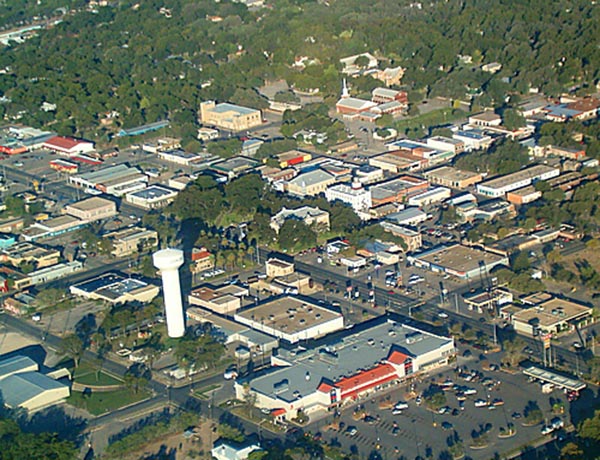 As the sun sets the sounds of night descend. Glancing about at the rest of your gang you realize you can hear something out of place.

The river off to your right. The road beneath you. The left is a darkening green canopy of trees. The road of cracked asphalt leads out ahead of you pointed at the city a mile away. To your rear, the way you came, an expanse of darkness and asphalt.

1.) The low rumble of your engines.

2.)
https://youtu.be/thbgObpfoNs
these insects don’t usually “sing” at night unless disturbed.


Something else. Something... Fluttering?

3.) A swarm of bats streak across the sky above you.

The swarm circles back towards you as you hear the throaty chuckle coming from the tree line.

Moving out of the darkness of the trees are 16 ... men? No. Red eyes. Fangs. Ratty clothing. Pale, walking corpse with sharp fangs, pointed ears, long fingers, long fingernails, and a corpse-like pallor. Vampires. On closer inspection as a strange mist envelopes the area you notice most are wearing body armor and carrying high tech weapons. That’s new.

Page 176 Blood and Banes. * Pay attention to their weakness * 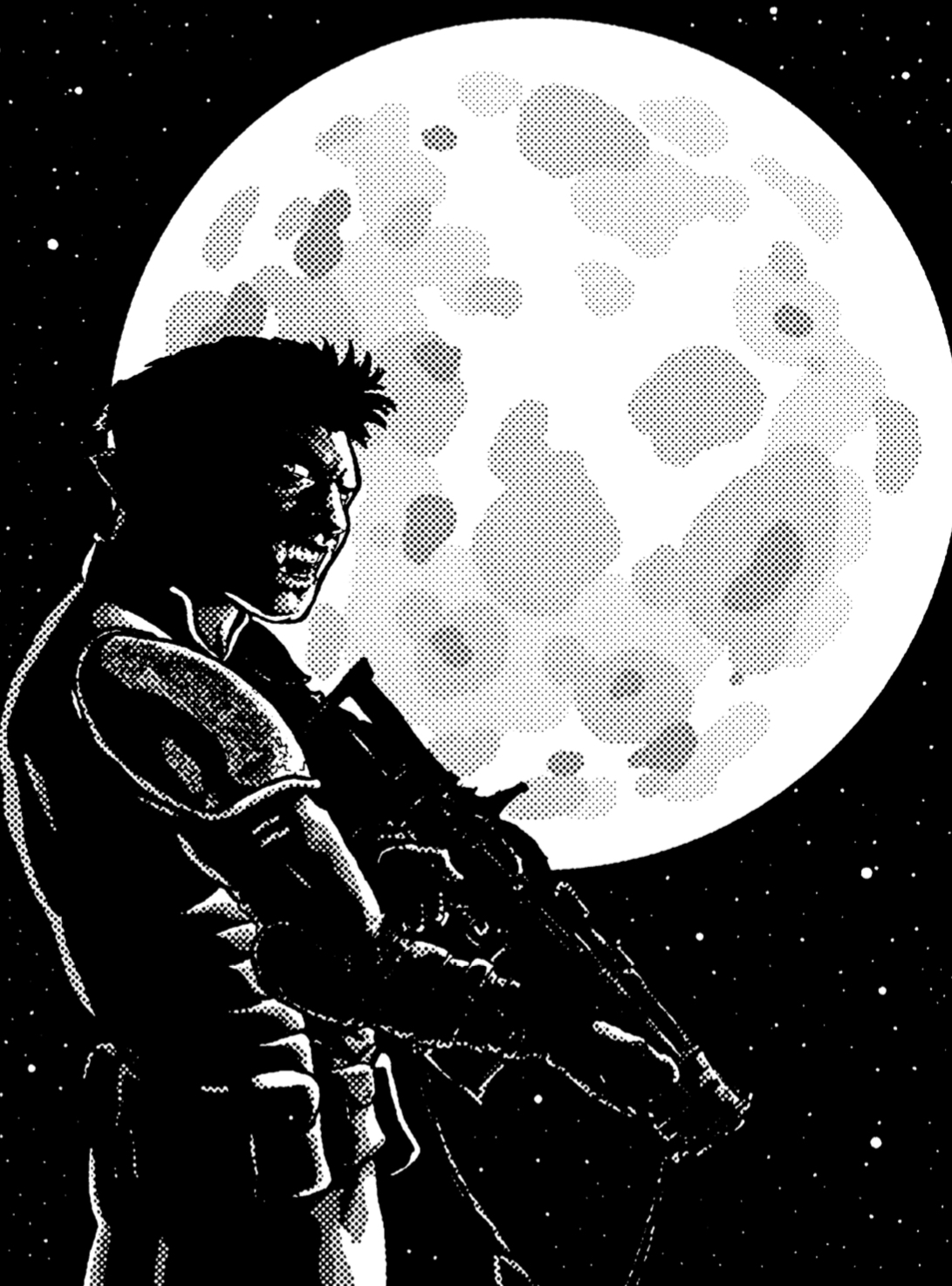 Raising weapons at you the vampires snarl and drool. One motions for them to attack.


Highest number goes first. 53 and 54 are Jokers. Post in any order you wish. 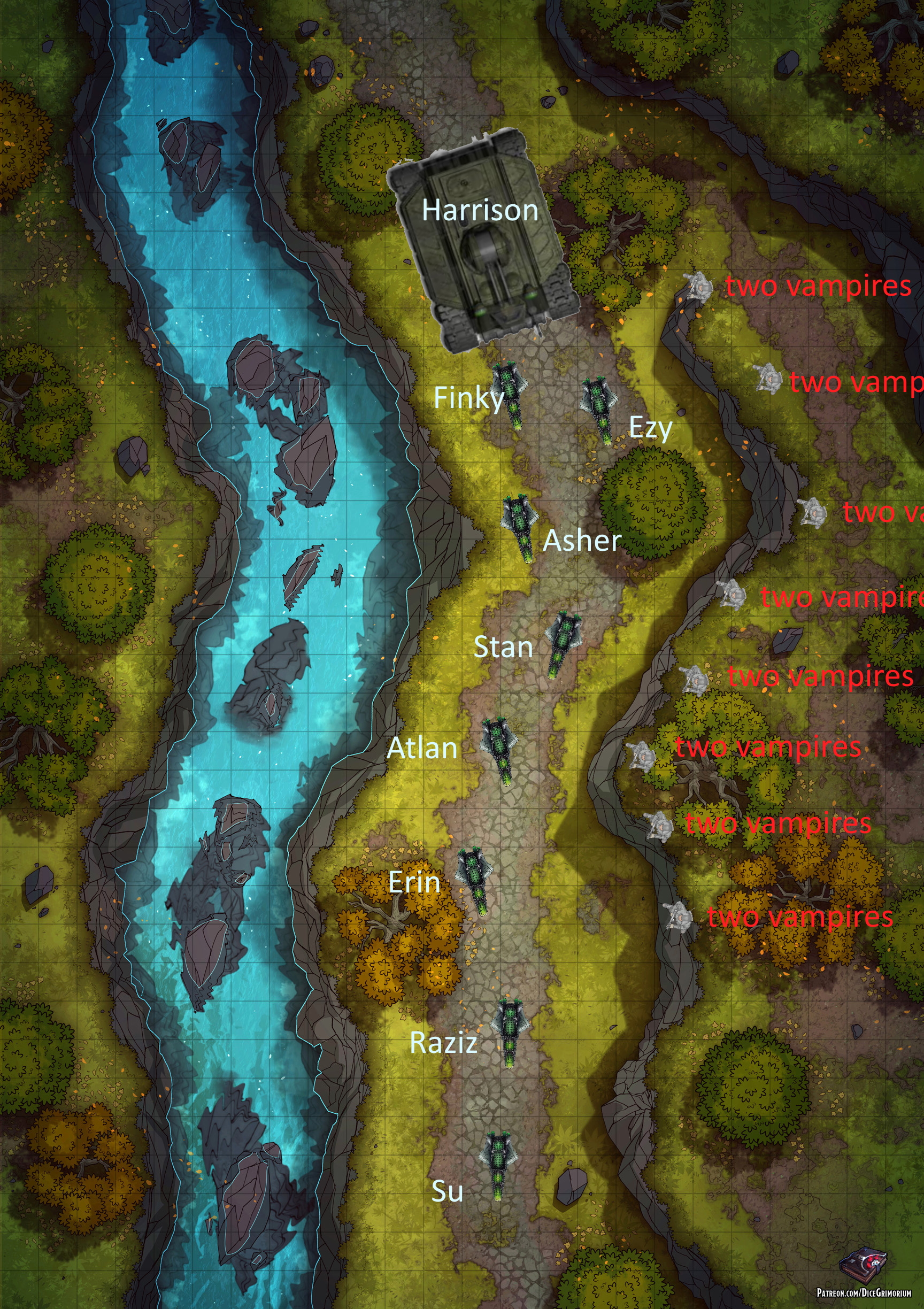 Seeing the undead creatures, Raziz immediately swings his rail gun around and pours fire into the ridge line. The NG-303 barks to life sending high velocity rounds into the trees, vampires, and ridge beneath them kicking up lots of debris, and dust. As he shoots he reverses down the path to put his bike between himself and Erin Tarn, afterall if she dies no one will pay them!

Sulannus kicked her machine up higher into the air to get a clear field of fire and swerved out over the river to protect herself from being overrun. As she did that, the elf murmured words of powers in the Elder Tongue, causing the colors in the world to wash away and bringing time to an apparent stop. In that cold, still shadow-world she moved with dreamlike surety...pulling Siloin from her case and drawing an arrow from the wood of her stave. Each shot was for her carefully aimed, taking her time.

Meanwhile, in the real world, Sulannus seemed to be a blur of action, her arms moving faster than humanly possible, her shots fired with all the accuracy of a marksman, but with the speed of an automatic weapon!

The three vampires closest to the APC sprouted arrows of living wood in their chests, impaling each of them in their hearts!

Harrison has never encountered vampires but from the stories he’s heard he doesn’t want this encounter to get any further than it’s gotten already. Harrison turns his Mountaineer ATV to face the one who motioned for the attack and unloads a round onto the one standing next to it, spraying away from the leader.

Asher is not concerned with the situation. His encounters with these types had always been further south.

Thinking on the situation, he wishes that he was packing a few tanks full off pre-Rifts jet fuel. Flying overhead and spraying down the vamps with that highly combustible and flammable liquid spell instant burn for vampires.

Thinking that he recognizes one of the vampires, he flips on his intercomm.

"I am certain I warned you about crossing me a second time."

Gadget goes BOOM
Weird Science - Burst gadget: 1d8!!-2: [5]-2 = 3
WD WS - Burst: 1d6!!-2: [4]-2 = 2
Benny WS with Elan: 1d8!!: [1] = 1
Benny WD WS: 1d6!!: [1] = 1
Finky's eyes go wide as dinner plates when he spies the vampires along the treeline. "I got this!" He cranks hard right on his hovercycle and pitches towards the river. He jumps to dismount with a toolbox and a handful of spare parts. Working at a feverish pace, he cobbles together something that resembles a sump pump with a turbofan hooked up to a hose. "HA! Have a drink, boys!" The gremlin flips the switch, only to realize too late that he forgot to add a modulator. In a flash, the pump detonates in a spectacular, watery explosion. The force of the liquid combustion throws Finky back towards the hovercyle where he lands awkwardly, his chest striking full into the control cluster, knocking the wind from his lungs. He falls into the river, sputtering and gasping. "NUTS!"
Finky Snipcord
Finky Snipcord
Pace: 6; Parry: 5
Toughness: 12 (5)
Armor: Urban Warrior Tactical Medium EBA
Pertinent Edges: Ace/Combat Ace, Improved Take 'Em Down, Elan, Conditioned
Current Status Post
Top

Atlan spot the vampires and looks around. This ain't good, ain't good at all. Putting his high arms to work on building a gadget, Atlan focuses his mind on himself increasing his mastery of the ranged weapon he is creating in that very moment. Then once the weapon is ready he lifts it and fire out three powerful streams of high preasure water strong enough to cut through steel!
Yep, that is right a common cutting technique for precision cutting! https://youtu.be/YlacOX68OME

The bolts fly out and hit three of the vampires, melting them away into nothing!

Action 3: Modifiers; MAP -2, Hand-to-Hand Reaction Wiring +2. Net 0
Fighting 1d8!!: [7] = 7
Wild 1d6!!: [3] = 3
Stan grunts in irritation at the appearance of vampires. Not at all like the ones from the sagas, these were neigh invulnerable to most of the tools he had, especially with them in combat armor. Be kinda hard to jam a stake through that. Then Sulannus incaps a few with arrows and he sees how to help. Unsnapping the harness that holds Clips, he sends the drone up for a birds eye view of the incipient battle. He then guns his bike, flying up to the northmost pair. He rolls off the hoverbike, dropping between two of the arrow stricken undead, draws his vibro blade, and decapitates them. Kicking the bodies and heads into separate piles he grins at the other vampires. "Stupid leaches, you should have stuck with livestock."
Top

Sixteen Vampires walk into the clearing. One is untouched by the ensuing events. Almost immediately three of the vampires are put down from arrows to their hearts. Hissing, smoking and collapsing into a pile of bones they are not the lucky one.

Six of the beasts stand distracted by a barrage of blasts and are uncertain how to react from the violent abruptness of the attach.

Three more of the night creatures are cut down by high powered water, slicing them into blood piles.

Out of no where two more drop decapitated and as their heads roll away the one known as Renard looks terrified and steps back a little from Asher.

The lucky one, a older looking vampire, possibly even from before the coming of the rifts, hisses in frustration and leaps out towards the speed tribe. Firing his energy rifle one handed at Erin Tarn

. Erin is knocked off her cycle and is Shaken and has one Wound.

Continue Combat, there are still 8 Vampires.

Having never seen Vampires before, Ezy is a little slow on the uptake.
"Yo VIP, kick it!" his communicator monotones as he shakes the cobwebs from his head, unlimbering his TX-11 Sniper Laser Rifle from it's holster on his wastelander motorcycle.
"Love it or leave it you better gang way," Ezy sights the leader of the vamps, feels the tension in his chest ease, and aims for the ugly fuckers blood suckers. "You better hit bull's eye the kid don't play"

Somehow Erin Tarn managed to get herself shot despite Kelraz's massive bulk between her in the vampires, "Morons we're probably aiming at me...can you still ride?"

Growling into his radio the troll gives a sitrep, "Tarn's hit. Moving her out of the way, someone kill those things."

With that he sends more impressive fire into the vamps, covering Erin as they move out of the line of fire.

Seeing Erin gets knocked around he starts to worry, until he sees Raziz has her safely in hand. "Do you need help Raz, or do you have it?" He asks unsure if the giant warrior will need any more cover fire, before suddenly seeing a spray come from the warrior distracting so many vampires as they duck, dodge or weave to avoid the blasts.

If it's not broke don't fix it is as good a saying as any to stick to when shooting vampires. Atlan lifts the weapon he just created and attempts to activate it, then realizing too late the power is depleated from the device he loses a great opportunity. Adrenaline filing him, he began working on a force field to protect them from incoming fire.

A$her looks at Renerd. He feels the vampire is of little concern at the moment.

Moving on to the next pair of shot up or arrowed Vamps, Stan keeps chopping off heads. He kicks the heads over into a pile for a little post battle bonfire. Between his own enhanced senses and the view from Clips he's getting some good footage. Vamp killing always plays well.

"Not exactly the old times I thought we'd be reliving, but still fun stuff huh?"