Home to characters who have been put into an official "Inactive Character Slot" for later use.
Locked
6 posts • Page 1 of 1

Background
Rubbing his hand across his forehead, John takes a deep breath and stands up from the side of the bed. He casts a quick glance over his shoulder at the sleeping woman in the bed - Leverne - what a perfect name for a weapons sales lady. Smiling, the former intelligence officer scans the apartment, small, neat, nothing much but hell this is Roswell, New Mexico the whole town is nothing much. A stopping off point for those trying to push further west and really just a big damn Black Market front.

Coming back here was probably a bad idea, but he needed a place to hole up and Leverne’s “home cooking” was too good to ignore. Although convincing her he was the same guy she met before had been pretty hard, he was wearing a different face at the time! But, John Freeman could be damn convincing. That skill was a credit to his father, a con man who ran in the ‘Burbs of Chi-Town trying to make a quick buck to feed his son. John nearly followed in the old man’s footsteps except for a bad double cross by some d-bees. Instead, John sought the safety in numbers found in the CS army. Turns out con men made good intel spooks.

Unfortunately, his career as a spook didn’t last long after he was burned while spying on a Northern Gun weapons research and development lab. Shaking his head at how that all went down, Freeman still can’t believe he didn’t get disavowed. Instead, they moved him out of undercover operations and into clandestine ops, riding with the 110th Nightstalkers, saving the world, and tearing up the west in the process. The one ten was a lot of fun and it was too bad they got broken up, most sent to some off book op in MercTown and John given some work for the infamous Colonel Lyboc. That was where things went bad.

As usual Lyboc had his fingers in some bad ju-ju and when things went south the Colonel hung John out to dry. Not one to take things lying down, Freeman did his own digging and dug up some dirt on the Colonel that essentially ended things i na draw. John would leave the service and Lyboc would go on with life. Things didn’t go as planned. Not one for loose ends, Colonel Lyboc sent one of his assassins after John. Fortunately, John was able to escape with the help of his buddy, Sebby, an art dealer and smuggler in Firetown. But he was no longer welcome in the CS, and had a black ops hit squad out looking for him. Not the worse situation he’s ever been in, but not great either.

A sudden crash tears John from his musings as the door comes flying off its hinges and a great big mutant bear , augmented with cybernetics, charges into the room. Taking cover, John gets to his duffle bag but doesn’t have time to do anything for poor Leverne who wakes up screaming at the sight of Papa Bear and black clad special forces soldiers filing into the room, rifles at the ready. One of the soldier’s grabs her roughly, his vibro-blade sliding up to her throat.

“Give up the evidence Freeman,” he says over the woman’s maddening screams. “Okay, okay,” John says as he slowly raises his hands, revealing a grenade he managed to grab from his bag. “You got the girl, I got the grenade. Maybe we should trade?” Freeman proposes nonchalantly.

“Not a chance asshat!” Comes the reply, “Sick him Max!”

With furious quickness the mutant bear charges at Freeman, way faster than he expected something that big to move. Caught off guard John tries to take the hit but is sent flying by the creature’s massive strength. The impact is so great, Freeman loses his grip on the grenade and it lands near the feet of the trooper holding Leverne. Just before the ordinance detonates, John goes down in a heap under the weight of the big bear - it's massive bulk shielding him from the blast.

Somehow, above the explosion, he hears Leverne screaming as the frag grenade shreds her and the mercs to bits. A scream that might be forever etched in his head. Rolling out from under the bear, who was only stunned by the blast. Freeman leaps out of the hole in the wall created by the blast.

Barreling down the street, Freeman ducks into the alley where he stored his gear and leaps into his stolen CS power armor. Hitting the jets he takes off to the east, firing some particle beams back into the apartment to keep Max the Bear from following him. With the explosions in his rearview, the deserter turned murderer tires to figure out his next play.

For the first time in his life, he draws a blank.
John Freeman
Character Sheet CS-AEWS "Gremlin"
This experimental communications device, designed to be given to CS Technical Officers for electronic warfare operations, earns its name from the small, mischievous, goblins who gum up the works of mechanical devices. The Gremlin allows a communications specialist to conduct normal radio operations within 300 miles, listen to encrypted enemy radio signals within a 100 mile range, and actively jam units at close range. These impressive ability can keep commanders connected to their troop, provide head's up on enemy movements, and cause confusion through the break down of communications and control. Gremlins are modular in design and can hook into any standard CS radio system. No units have gone into mass production yet, and the project is currently on hold while a prototype unit is recovered from the field. It is currently deployed on a stolen Super SAMAS that was stolen when a CSID operative went AWOL. 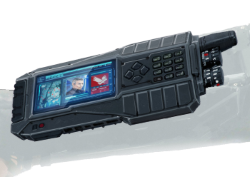 NG-S2 Survival Pack
This Northern Gun classic is a fairly common starting item those roaming the wilds. It contains just about everything needed for basic survival. (30 lb)
2d6 × 100 credits.