Powers
Notes
Telepathic connection to Tribe: by activating telepathy as she goes to sleep, she can communicate with the Tribe's Elders in her dreams, no matter where she is on the planet (doesn't work if she's off-world).

Star Tattoos: Once per rank travel back to Trieb for additional HJ psionics roll (reference)

Tribal Skills: does not have to pay the "new skill tax" when increasing Shooting, and Shooting and Survival are always considered to be below the associated Attributes (up to d12) (reference)
Shard Power (from Overconfident Hindrance)
Character Information
Herra, Psychic Warrior
30/30 I.S.P.
1/3 Bennies
Edit Signature
Top

Background
Slavers. Sometimes she still dreams about them. Floating across the surface of her homeworld, snatching up her friends and family. Evil creatures on floating barges with female minions casting out nets and stunning people to the ground. Her village fought bravely, but in vain. The beings, she later found out were minions of the Splugorth, took them in cramped pens to a great market on another world. She, and a group of other children, were deemed too small and weak but their psychic abilities attracted some attention. Thus, she was bought and sold a dozen times before arriving on Rifts Earth to train as a fighter in the slave pits of Splynn where her psionics powers flourished in the magic rich environment.

Training was rigorous and brutal, usually done under the instruction of bitter tattooed warriors. One of her trainers, Spider, was a long time veteran and took Herra under his wing. When Spider's family was killed Herra secretly helped him to escape. Later, as she neared the age of 16 and was prepared for battle in the fighting pits Herra was purchased by mercenaries to fulfil a contract in North America during the Juicer Uprisings. Her group took heavy losses and Herra used the chaos and confusion of the Uprisings to make good her escape. Knowing Spider had escaped to North America she began to look for him. Only to find him in a CS prison! Once again the plucky psychic helped her former trainer to escape.

Fleeing the CS and seeing war and devastation everywhere they went, Herra and Spider travelled through the wilderness stopping to help anyone who needed it (Spider usually reluctantly). Eventually, the pair came across some members of the Tomorrow Legion and Herra immediately attracted to their cause while Spider came along for the ride.
Character Information
Herra, Psychic Warrior
30/30 I.S.P.
1/3 Bennies
Edit Signature
Top 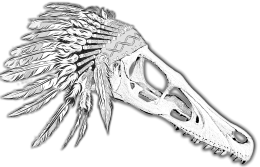 Velociraptors are canny and dangerous predators (their name translates to "swift seizer") that use speed and initiative to subdue and consume their prey. The enchanted raptor skull is worn like a helmet or headdress and gives the wearer predator like instincts, able to see and react in battle with ferocity and clarity. This is a mystical heirloom of the Moon Hunter Tribe in the dinosaur swamps, only a few are known to exist and are usually given to elder warriors and heroes of the tribe.


Psi-Warrior Initiate [Background Edge]
Prerequisites: Novice, Psionics d8, Fighting d8, Mind Melter or MARS
You have mastered the trials of Fasting and Denial. You require half the normal amount of sleep and can go without food and water twice as long before testing for Fatigue. You add +2 to all rolls against Fatigue. If you have or gain the Psi-Blade Edge, you count as a Cyber-Knight for the purpose of qualifying for the Psi-Shield Edge.