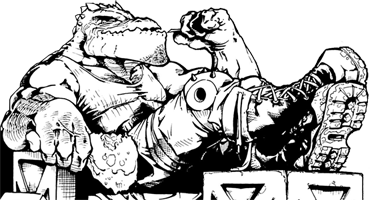 Larmacs are big beefy d-bees who resemble giant lizards. Despite their reptilian features they are mammals. A study in contrasts, Larmac are generally lazy despite their strength and toughness. They often rely on intimidation and strong arm tactics. They love leisure, enjoy getting drunk and eating. They have no issue sleeping where they fall down, whether its a bed in a nice hotel, a couch in an office, the back seat of a hover vehicle, or the nearest alleyway or gutter. They are a classic underachiever, doing only enough to get by. They often find work as crooks, bodyguards, enforcers, and bouncers. When not working, you'll find them doing their four favorite things: eating, boozing, partying and sleeping. Even the most highly motivated Larmac will still relax and eat at every opportunity. They are thick skinned, however, immune to the insults of others - until they aren't. The most terrifying words a Larmac can say are "Don't make me get up." Because once they do, things are going to be broken.

• Big and Beefy: Larmacs are powerful, big, and tough. They start with a d8 in Strength (increasing their maximum strength to d12+2), are Size 1, and increase their Toughness by 3 (Including the increase from Size).
• Larmac Resilience: Larmac are incredibly resilient, with Environmental Resistance to both Heat and Cold and can go longer than humans without food or water - not that they will do so willingly. Larmacs also heal damage quickly. They may make a natural healing roll once per day (rather than once per week).
• Low Light Vision: Larmacs, like the lizards they resemble, ignore penalties for Dim or Dark lighting (but not Pitch Darkness).
• Big, Awkward, and Hungry: Larmacs have odd porportions, with thick stubby limbs, lizard shaped heads. Rifts Earth armor and clothing must be custom-tailored at double normal cost. Equipment and food cost double the listed price. Glitter Boy armor (including the Iconic Framework) and most human power armor is not an option. Further, they are slow, having a Pace of 5 and a Running Die of d4.
• D-Bee: Larmacs are quite inhuman. They are treated with hostility by human supremacists, distrusted by commoners, spurned everywhere, and have no rights except in the most cosmopolitan areas. They should expect frequent trouble and violence, depending on the crowd and situation, and Reactions of others typically starts at Unfriendly, or Hostile for human supremacists. Failed social checks with Hostile parties often result in violence
• Lazy Party Animals: Larmacs are famously lazy and prone to excess when it comes to a party, gambling, eating, and drinking. This counts as the Quirks Lazy and Compulsion to Party and Consume.
• Made Different: Larmacs have a unique physiology, causing problems for those unfamiliar with their biology, and medical supplies or cybernetics designed for human use. This gives a –2 penalty to Healing and cybernetics checks. Juicer and Crazy augmentations don’t work for them either. Compatible medical supplies/services and cybernetics cost double the listed price.
• Unsuited to Magic: Larmacs are not able to really learn magic, because of the difficulty and focus it takes. Because of this they can't take an Arcane Background which uses PPE or an Iconic Framework including such an Arcane Background.


Big and Beefy (4 points for Str d8, +1 for Size 1, +2 for Toughness +3=7)
Low Light Vision (1)
Larmac Resilience (Environmental Resistance Heat (1) and Cold (1), plus Slow Regen (2) = 4)
Big, Awkward, and Hungry (Combination of Non-Standard Build and -1 Pace/Running Die with increased food and gear costs due to size. -3)
D-Bee (-2)
Lazy (Quirk: Lazy and Quirk: Compulsion to Party and Consume -2)
Made Different: Inhuman Physiology -2
Unsuited to Magic (Restricted Path PPE -1)
Link to the Savaged.us saved race so you can use it there.
Tales of the 17th SOG
"In so far as you are concerned, I am the right arm of High Command itself. You are my Fist, be ready to strike at any moment." Major Killian Gregor, 3rd SOG Battalion, CSSD, Chi-Town.
Top

Being born a psychic might seem a windfall to the average Larmac, but to this particular fellow, it's proof of his innate superiority. He can laugh off effects that would debilitate others and has on a few occasions stared down and defeated some vampires that thought he would be easy prey simply because he was drunk at the time. His abilities tend towards action - either tossing things around with his mind or simply boosting himself as the superior psionic being that he is. Still, he knows the value of good friends - not the least because they like to pick up the tab! Sometimes they don't realize it, but he helpfully reminds them and has their back when it matters. He's great at knowing his way around and finding what you need when you need it. He thinks of himself as good at everything, but really he relies on his psionic abilities most days. Still, he's good to have in a fight, especially if its some supernatural monster. And he's always ready to rumble if its for a friend. And he's willing to be bribed into being people's friends if they are willing to pay for his latest bar tab and gambling debt.

Suggested Advances
Tales of the 17th SOG
"In so far as you are concerned, I am the right arm of High Command itself. You are my Fist, be ready to strike at any moment." Major Killian Gregor, 3rd SOG Battalion, CSSD, Chi-Town.
Top

This quintessential wanderer gets by as much on luck and moxy as she does skill. Good with her fists and curious to a fault, she ends up getting in over her head more often than she cares to. She hesitates in battle, largely always trying to figure out if she can just get away. She's always broke, having spent her last money on the latest revelry that she can't stop talking about. She is the life of the party, everyone's friend, and the last one you want to start a bar fight with. She loves gambling and is actually good at it, to the point she's been kicked out of a few casinos in her time, but she always worms her way back in. She's been banned from the Palace Casino in Merctown no les than five times, and each time its owner ends up forgiving her. She lives a charmed life. She has lost fortunes entire merc companies would cry to see gone. Most nights she ends up sleeping where she falls down and picks up her meager belongings when she wakes up, bleary eyed, and wanders off to the next great adventure of her life.

Created with Savaged.us
Tales of the 17th SOG
"In so far as you are concerned, I am the right arm of High Command itself. You are my Fist, be ready to strike at any moment." Major Killian Gregor, 3rd SOG Battalion, CSSD, Chi-Town.
Top
Post Reply
3 posts • Page 1 of 1